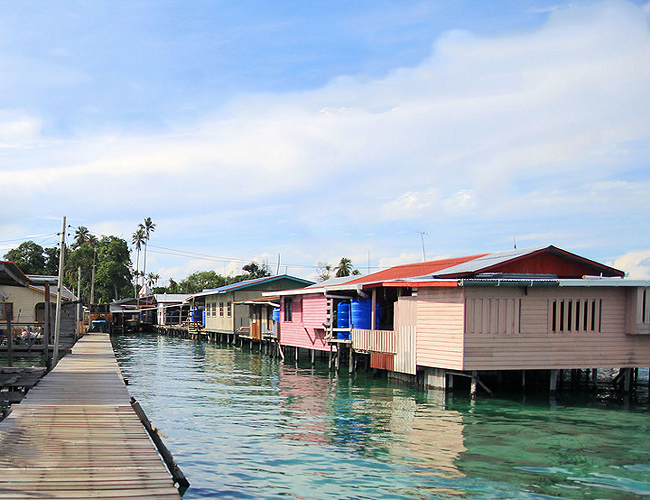 Pulau Selakan is the most populated island of the Tun Sakaran Marine Park and features a school which attracts children from the others islands. Tourists can stay there overnight and experience the natural way of life of the locals: the Bajau Laut who spend their entire lives inside boats or in homes built on stilts arising from the water.

Sandy beaches fringe Selakan. The northern part of Selakan has several beaches, and mangroves grow in profusion on the north-western side.

Selakan gets its name from a person called Panglima Selakan. The original title 'Panglima' is a honour which roughly translates into the word 'army commander' but later the word came to be used to refer to a village chief. Panglima Rubbani Bin Imam Isnin was a Selakan village chief and Panglima Selakan was his forefather who planted coconuts in the island.

Selakan is a raised limestone platform with an area of 32 hectares. The coral limestone has been worn away in many places and what remains creates a rocky border around most of the isle. Selakan is on the south-eastern side of the reef complex consisting of Sebangkat and Selakan that is separated from the Bodgaya Island by a channel, though all the three are presumed to be originally parts of the same volcanic formation.

Scuba Diving and Snorkelling in Selakan

The primary tourism activity in Salakan is diving and snorkelling. Dive boats ply daily to the island bringing visitors for diving, snorkeling or just exploring on foot.

The Bajau Laut community of Sea Gypsies in Selakan have an exclusive lifestyle and culture.

Plenty of seaweed farming goes on here for those interested in visiting.

Where to Stay in Selakan?

Selakan has simple longhouses and homestays where tourists can stay overnight. These are quite basic without air-conditioning or attached bathroom so for those who need a bit more comfort, it is recommended to stay on nearby islands of Mataking, Pom Pom, Singamata or the town of Semporna. Visitors are taken to Selakan by speedboat.