Sipadan is rated in the top 10 Dive Sites in the world ! 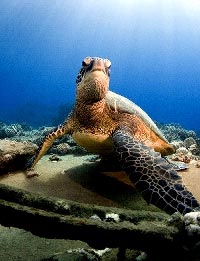 Sipadan is recognised as the best diving in the Malaysia and amongst the best in the world.

Sipadan is the only oceanic island in Malaysia, rising 600m (2,000 feet) from seabed. It was formed over thousands years by living corals growing on top of an extinct volcano.

This tropical island off the south east coast of Sabah is well known for its stunning underwater scenery and large numbers of marine species.

Enjoy amazing diving scenes such as:

Scuba diving in Sipadan is year round with the best time being between April and December.

Recommended Length of stay: 5 to 14 days (including nearby islands). 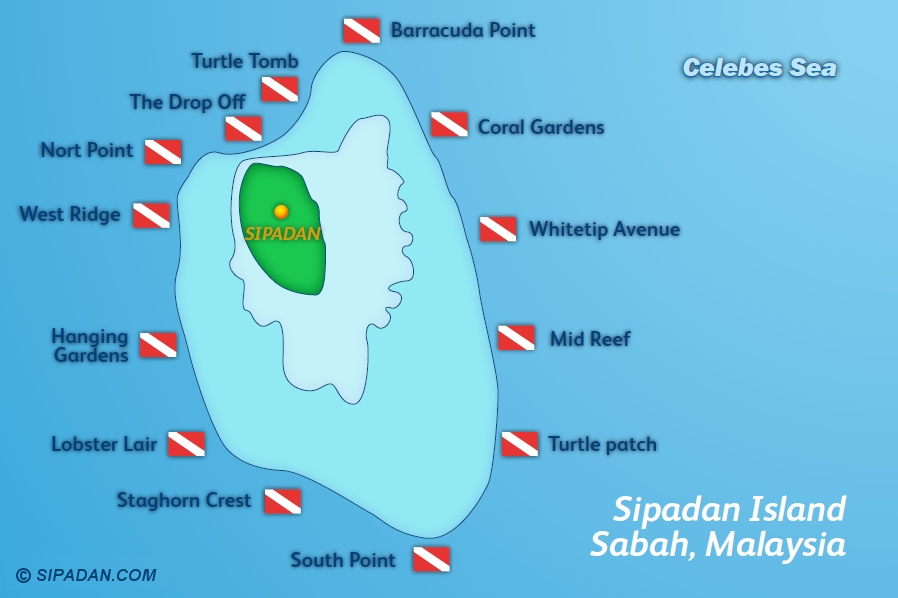 Situated off the east coast of Sabah, Malaysia, Sipadan Island is one of the world’s most renowned diving destinations and is probably on the bucket list of all diving enthusiasts. Just one visit and you’ll understand why the famous oceanographer Jacques Cousteau declared this idyllic Island to be an “Untouched piece of art”. 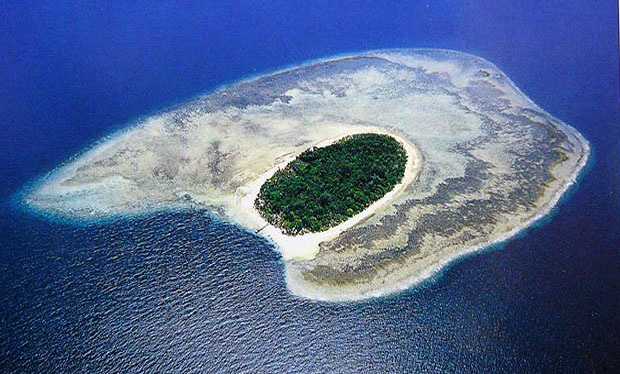 Which Rare Marine species can be found at Sipadan?

Notorious for its' reefs and thousands of amazing and diverse species of marine life, some of these fascinating creatures (See below) are now the world’s most rare or critically endangered species and are highly protected with several conservation projects taking place, and with stringent dive permit allowances.

Out of only 7 turtle species in the world, 4 of them can be found here! They especially are the big draw here as on just one dive alone, you could see more turtles than you would anywhere else in a lifetime, up to many as 20 according to some dive blogs. Thousands come to nest on Sipadan beach every year between December & July, affording researchers the ideal opportunity to study them. Their numbers have been dwindling due to being hunted for their meat, over-harvesting of eggs or getting caught in fishing nets, so there are turtle conservation projects in the area working to protect their natural habitats.

Named for the colour of their skin and shells, these are the largest sea turtle species, can be as big as 1.5m long and could weigh as much as 320kgs. Being the only herbivores, they are often found hovering in the seagrass and algae which they eat.

Part of the slug family, these strange invertebrate creatures are shell-less molluscs with bodies like jelly, ranging in size from 2cm to 24cm long. There are over 2000 wildly coloured species in the world, with several rare ones seen in Sipadan. The scientific name ‘Nudibranchia’ means Naked Gills, and there are two known types - Dorid which are almost smooth with tiny feathered gills near the back and Aeolid which have pointy organs or plumed gills called ‘Cerata’ all over their backs. They are carnivorous, eating reef sponges, barnacles, fish eggs, anemones and even other nudibranchs. Interestingly, they are hermaphrodites that mate with any members of their species.

Glossodoris Stellatus or Starry Nudibranch is one of the rarest Aeolid species in Sipadan, as they have only ever been seen in Papua New Guinea where they were first discovered. The body is a dark brown or black with 12 pointy brachial plumes along its back, covered in teeny white speckles, hence the name “Starry”.

Phyllidiopsis Kremfi – This is one of the biggest and rarest species of Dorid Nudibranchs in Sipadan. It’s candy floss pink with two long lines and several parallel lines along its back and covered in teeny white tubercles that resemble popcorn. To distinguish where the head is, look for small black antennae, called Rhinophores.

Phyllidia Babai – Of the 6 species of the phyllidae family, this elusive Nudibranch is the rarest. It’s grey, cream and pale-yellow colour with tiny white tubercles set in black rings, and the mantle, or underside is bright yellow. Most species in this family tend to give off a smelly poisonous chemical that is toxic to fish and shellfish predators.

There are over 1200 species of Sea Cucumbers in the world in a huge variety of colours. They’re not particularly cute as they look like weird and unusual slugs, but they are all very ecologically important as they keep the sea clean! Usually found resting on or half buried in the sandy ocean floor, these bottom feeders use tentacles or tube feeding feet to gather and eat debris, decomposing or organic matter, they then ‘poop’ out this aerated nutritious and clean looking sand which helps keep the ecosystem stabilised.

Thelonota Anax or Giant Sea Cucumber – This species is quite rare, can measure up to 61cm long, about 13cm wide and their abrasive skin varies from yellow to grey with brownish blotches. Around Sipadan, they have only been spotted in the sandy bottom and rubble at Barracuda Point dive site. Being so big, some crabs and snails have been known to live on their backs.

Actinopyga Albonigra – This Sea Cucumber can be found on the shallow waters, usually grazing along the sandy sea floor. It has pale greyish skin with black and brown splotches, and many divers nicknamed it the Dalmatian sausage.

Maybe the most beautiful of marine creatures, there’s about 2000 species of these echinoderms in the world and are related to sand dollars and Sea Urchins. With a hard, bony skin, they come in a rainbow of colours in a star shape with 5 arms, but some species are known to have 10 or even 40 arms! As invertebrate salt-water carnivores with no brains, blood or eyes, they can regenerate lost limbs, and survive up to 35 years by feasting on clams, dead fish, oysters, corals and mussels.

Thromidia Catalai – One of the largest known of its species, its colour ranges from white and yellow to orange with brownish tips. More commonly called Brown-tip, Heavy or Fat Starfish, they’ve can weigh as much as 6kgs, and measure up to 100cm diameter. It lives in lagoons or on the outer edges of reefs, but has rarely been seen throughout its natural habitat, so records of its sighting in Sipadan is an exciting confirmation for the Indo-Malayan Archipelago.

Celerina Heffernani – This rare and beautiful Sea Star is more commonly known as Heffernan's Sea Star or Pebbled Sea Star. They range from blue, orange and red with clusters of cream circles, and have tiny spikes on both sides of the arms. These tiny creatures just 10cm in diameter, are an exciting find in Sipadan for macro photographer enthusiasts and copepod researchers since there’s been only a few records of sightings at other Indo-Pacific locations.

Sipadania Celerina – This miniscule copepod parasite, like a bedbug or head lice, lives on the genitals of the Celerina Heffernani Sea Star and was named for both the Sea Star and Sipadan Island. It has a striking red cross on the body to camouflage it from its host.

Charonia Tritonis or Triton’s Trumpet was named after Triton, son of the Greek God Poseidon. It’s a huge marine gastropod mollusc – a Sea Snail with a striking shell that can grow up to about 2 feet long. They are fierce predators of Sea Stars, and especially the Crown-of-Thorns Sea Star, using their knife-like tongues to saw through the tough calcified skin, and tearing them to shreds. The Crown-of-Thorns Sea Star has been known to plague whole swathes of coral reefs, destroying and killing them, so the Triton’s Trumpet plays an important ecological part in controlling these outbreaks.

There are at least 80 species of colourful Sponges seen on Sipadan Island, however only 30 have been positively identified. Some of the unidentified ones could possibly be new or rare species. As a simple animal with no organs, tissues, head, mouth or eyes, Sponges survive by pumping water through their spores and extracting particles of food, and can live up to 100 years, but they do have quite a few predators like Nudibranchs, Box and Puffer Fish to name a few. Interestingly, many of the sponges around Sipadan have been found to contain natural antibiotic and antimicrobial properties, which could in the future replace non-natural drugs!