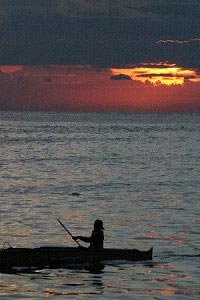 Sabah’s population is a culturally and ethnically diverse one with over 30 ethnic groups and more than 80 locally spoken dialects. The main ethnic groups are the native Malays as well as large populations of Chinese and Philipino.

The Legend of Sabahan's Origins

Sabahan’s origins are delightfully told in one ancient folk tale passed down through the generations.

The legend tells of an Eden-like garden named Nunuk Ragang found in the center of Sabah. On the banks of a river that flowed through the garden was a banyan tree. Children loved swimming under it and climbing the tree to sunbathe in its enormous branches. This is how Sabahans got their beautiful, golden skin color.

People were happy living together and their numbers grew. Before long, Nunuk Ragang became overcrowded. Families were forced to move, searching for less populated areas. Some crossed the valley, settled on the plains and became farmers. Others headed into the highlands where they hunted and reaped the rewards of the bountiful jungle. Many others trekked to the far eastern coast and built a life there. This is how Sabah’s people spread themselves around the state.

What are the Sabah Ethnic Groups?

Many of Sabah’s ethnic groups have similar traditions, languages and a comparable oral history. However, Sabah’s rugged terrain kept groups apart resulting in the development of many different dialects within the same language. Each ethnic group evolved their own handicrafts, dress styles and customs.

Many individuals ask what kind of people live in Sabah. The largest native group is the Kadazan-Dunsun. The next largest groups are the Bajau and the Murut respectively. Their customs and traditions were long ago embraced by many Sabahans who practice them in their daily lives. All the racial groups in Sabah live in harmony despite their different traditions, customs and festivals. It is this diversity of culture that makes Sabah an exotic destination.

The Kadazan-Dunsun people are predominantly hill and wet rice farmers. Their language is one of the Dusunic ones. They practice animism and believe that all of nature is living, including rocks and rivers. Nowadays many have settled in urban areas to take up professional and civil service jobs.

The Bajaus occupy the coastal regions and their population is quite concentrated. Most live between Kota Kinabalu and Kota Belud or the Semporna region. Initially, they were seamen and even pirates but today they are mostly cattle breeders. These farmers are known as Sabah’s “Cowboy Horsemen.”

The Bajaus who live on the eastern coast have traditionally been fishermen, however many have moved onto land now. They are Muslims said to have migrated from areas in the Philippines. However, some claim to have descended from Johor Malays.

The Rungus live in Kudat district and are known for having preserved their ancient ways up till now. Even traditional clothing worn by the women have not changed much. Some still wear dresses made from cotton that is grown locally and hand-spun. This ethnic group are renowned bead workers who embellish their clothing with their finest designs.

The Muruts dwell in the interior of Sabah, the southeastern regions and the areas surrounding the borders of Sarawak and Kalimantan. Their name means “hill people” and they were dreaded head-hunters at one time. This group is spread across the three districts of Keningau, Pensiangan and Tenom. They live in longhouses for the most part and are farmers, hunters and fishermen.

Muruts are hunter-gatherers. They use a spear or blowpipe when hunting. In the jungle, they gather resin, rattan and plant paddies. The Muruts are a diverse group speaking 15 languages with 21 dialects. The most widespread language is Tanggal. It is associated with the languages of the Kadazan-Dusun.

What are the Religions in Sabah?

When Sabah became independent, there was a substantial change in religious composition. The state is now largely Christian and Muslim with many practicing Buddhists and Hindus as well. The amended constitution of 1973, made Islam the state’s official religion.

Islam has strict dress codes and manners that should always be observed. It is expected that visitors will take their shoes off at the door of a mosque or home, for example.

Conversion to Islam is promoted by USIA. The natives of Sabah who do so are offered office positions and other incentives. Muslim immigration from the Philippines and Indonesia is also encouraged. Christian missionaries have been ousted from Sabah in an effort to reduce Christian numbers. As a result, Muslims now make up over 65% of the local population. Immigration has created a multi-cultural society which includes Filipinos, Japanese, Koreans, Arabs, Eurasians and Southeast Asians.

What are the Sabah Festivals?

Sabah is renowned for its festivals with their rich, cultural traditions.

Each state has its own but Pesta Kaamatan is a favorite. This festival, held by the Kadazans and Dusuns in May, celebrates the harvest. It showcases traditional dances and always includes the dance of Bobohizan, the high priestess. The dance is a ritualistic one requiring the dancer to place themself in a trance in order to hunt for the rice spirit and welcome the harvest.

Other festivals are held throughout the year, most notably Chinese New Year celebrated by local Chinese residents and Hari Raya which is a Muslim celebration.

Where are the Local Trade Fairs in Sabah?

Trade fairs happen periodically in some of the smaller, Sabah towns. They are open-air events called Tamus. The fairs are an opportunity for businesses to market their products and they play a key role in commercial trade. They are often spontaneous with lots of variety and buzz with the excitement of sellers and buyers.

Locals visit trade fairs to barter farm produce, handicrafts, food, traditional goods and plenty of other items. They are social gatherings with a cultural bent giving visitors a taste of a genuine ethnic bazaar.

The family is considered the centre of the social structure.

What is the Concept of Face?

Malays, Chinese and Philipino all strive to maintain face and avoid shame both in public and private. Face is a personal concept that embraces qualities such as a good name, good character, and being held in esteem.

Most Malays in Sabah are aware of Western ways so the handshake is acceptable. However, some women may prefer not to shake hands with mens.

How to Gift giving to Malays?

All gifts, but especially those with food, should be passed from right hand to right hand.

Malaysians rely on non-verbal communication. Such a communication style tends to be subtle, indirect and Malays may hint at a point rather than making a direct statement.

Rather than say "no", they might say, "I’ll see what I can do" or "I will try". This allows the person making the request and the person turning it down to save face and maintain harmony in their relationship.

It is considered rude to point a finger at other people.

Also, beckoning anyone with an upward-facing palm is considered impolite.

The waving of a hand should always be done with a downward-facing palm.

What Clothes to wear in Sabah?

Due to religious reasons, nude or topless sunbathing is not allowed in Sabah and is very frowned upon.

Women should cover their head, arms and knees before entering any place of worship. They should further avoid walking in front of anyone praying and they must not come into contact with the Quran. Sunbathing nude is not permitted.