The Lower Kinabatangan River and Sukau areas are known for its rich ecosystem, mangrove swamps and flood plains, and is home to its most famous inhabitants, the proboscis monkeys. 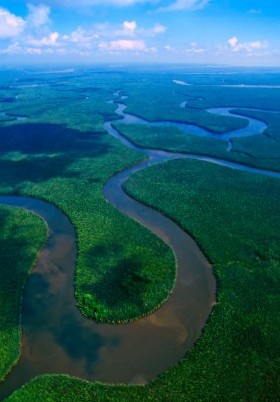 Sungai Kinabatangan is the longest river in Sabah which was declared as Sabah’s gift to the Earth in 1999. It measures about 560 kilometers from the southwest to the Sulu Sea. The upper part of the river itself has really been destroyed by clearing plantations and logging. It is pretty ironic that the riverine forest is surrounded by palm trees and palm oil plantations. The palm trees are now home to wildlife particular to that area. This only proves that life indeed finds a way. And this helps improve the environmental condition and status of Kinabatangan. This also proves that you could enjoy forward development with respect and care for life.

Every nature enthusiast’s trip to Sabah is highlighted by the wildlife of Kinabatangan. Mammals are very common in the area. You could see birds in activity from October to Math (rainy season). It was a little inconvenient to do this but you will be able to get the pictures and videos that you want. Just recently, floods that occurred annually and became worse as March approached. Because of this, the villages had to be moved. The operations of camps and lodges were halted until the waters ceased. But during the dry season, the lakes dry up completely.

From the Sandakan-Lahad Datu to the estuary surrounded by a mangrove a strip of rainforest lined the path. Here, proboscis monkeys were spotted in the mangrove forests every late afternoon. Orangutans were spotted often, settling in the surrounding trees. Macaques (pig-tailed and long-tailed) were found at any place possible.

Marbled cats could be seen in the forest if you’re lucky. Flat-headed cats are seen at night on a regular basis in Menungal (Kinabatangan’s tributary). Other animals that can be seen in the area are elephants, squirrels, and deer.

Bird watching is a very rewarding thing in Kinabatangan. All eight species of hornbill endemic to Borneo are spotted regularly here. Beautiful pittas are very commonly seen. You could also see the snake bird or the Oriental darter and the Storm’s stork as well.

Animal-spotting in Kinabatangan really depends on the knowledge of your guide and sheer luck. 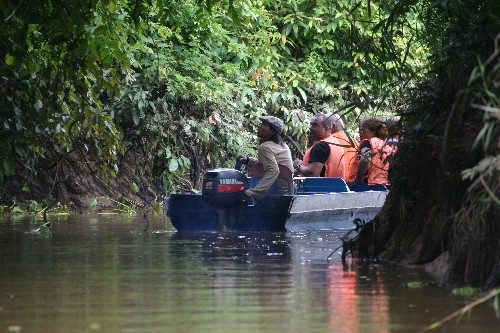 What is a typical Day trip on the Kinabatangan River?

A great number of bird species are quite prolific in the area. These include kingfishers, bee-eaters, egrets, hornbills, oriental darters and a lot more (see below watchlist):

Please contact us for booking your Kinabatangan river wildlife and birdwatching cruise.